When I arrived on Haiti’s Central Plateau on the 1st of August, maize fields were already full of sharp spears as high as my shoulders, and a friend came to visit with his backpack full of celadon-green ears of mayi. After the end of the rain-soaked month of August, crisp brown leaves rustle in the fields, and sharp spears dry brown on the stalk or hung in bunches from trees and rafters. Now, near the end of the rainy season, feathery pwa kongo (pigeon pea) plants are waving tall as the maize stalks wither. A few weeks ago, when you could count on rain by sundown, children gnawed on ears of sweet boiled corn; now the ears are grilled until the kernels are sweet and chewy – mayi boukane. The hard kernels will feed chickens, pigs, and people alike throughout the year, grilled or ground into mayi moulen, a coarse cornmeal served with bean sauce and, sometimes, spinach – my favorite Haitian dish. 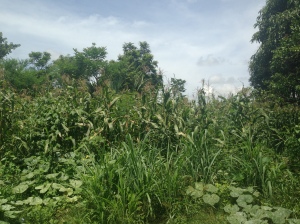 Although Haitians do not share a territorial and cultural unity as “maize people” with indigenous Latin Americans, they are nonetheless a people in part because of maize. Ecological relations linking revolutionary maize to “Miami rice” are profoundly significant to rural Haiti’s tradition of self-reliance, and these relations begin in the 15th century.